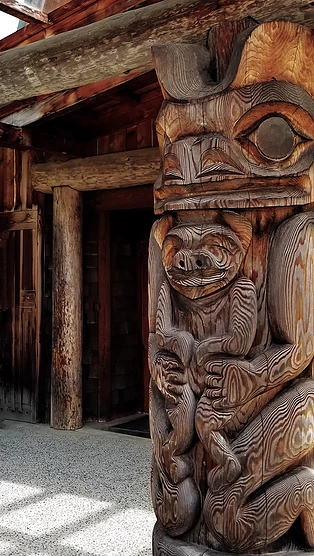 “In 1995 a group decided the time was right to build a new Community Hall so they rolled up their sleeves and got to it. The Hall was built in two phases over five years, as funding was available. Spirits were buoyed when Karl Hamson generously donated three acres of land. The Bear Mother Project was conceived in July of 1998 to coincide with the kickoff of Phase II of the ‘Raise a Little Hall’ fundraising campaign.

Pender women wanted to contribute in some way to the building of the new hall. At an open house at the Hall on Canada Day 1998, a relative newcomer to the island, Victor Reece, who just happened to be a Tsimshian carver and master story-teller, attended. In talking to a few women, he suggested that we “carve a pole.” Inquiries were made and heads were scratched as to where the pole would go; in the end it was decided that three poles would be incorporated into the entrance to the hall, welcoming all who passed. They would also serve as a reminder that the hall stands on the land of the Coast Salish people.

The idea caught everyone’s interest and a large number of women came out to the log peeling session in August 1998. We knew at that point that the project would go forward. Carving the three poles took us twenty-two months. In all, over 200 women took part, and a dozen or so men lent a hand when we needed help. It was all done on a volunteer basis. There were two rules: every woman was welcome, and there was no such thing as a mistake. (We bit our tongues on a few occasions and became really good at diplomacy.)

A dozen women, helped a lot by some very generous men, made the tools for the project. Using vintage metal truck springs and discarded sharpening files from a Vancouver Island sawmill, the toolmakers crafted blades for six adzes, 18 hook knives and 18 straight knives in about six weeks. The wooden handles were inscribed with names of women we wished to honour.

Word went out that we needed three logs of a certain diameter, with not too many branches, and we received ten offers. Synchronicity and symbolism came into play as the three logs were donated by pioneer families from North and South Pender islands and from a family who were part-time visitors to their lot on Razor Point.

We began the actual carving in the fall and for the next two years, we worked in various areas of the Hall as the building crew did the finishing work. We learned that it wasn’t easy to lift and move heavy cedar logs around. The first winter our working space upstairs was really nippy so we moved down into the lounge area. It had no walls at that time so we put a vapour barrier across the studs to seal the room so we could use heaters. There were only one or two electrical outlets in the building at that point so our options for heat and light were limited. By December we decided to abandon our Wednesday night sessions as it was too cold. For the remainder of our carving time, we met on Wednesday and Sunday afternoons.

Only one or two of the women had ever carved before so it was a steep learning curve for the rest of us, but patiently, one week at a time, Victor showed us what to do, while at the same time teaching us about his people and his culture. Important milestones were marked by circle gatherings during which a feather was passed, giving the holder the chance to speak. Victor often drummed at these events.

Renowned author and expert on the First Nations use of cedar from cradle to grave, Hillary Stewart supported the project by presenting a workshop and also attending the final celebration as an honoured guest.

Three other community groups, the Pender Island Art Society, the Shop Craft Guild, and the Museum Society, also made contributions to the Hall. The Art Society painted the two-paneled mural which depicts a hundred years of Pender history; this is located upstairs. The yellow cedar – enough to make 27 doors – was donated by a part-time Penderite who owned Delta Cedar Products. The Shop Craft Guild made the doors to the lounge and others made the back doors and all entry and inside doors. The fir for the big back doors and all of the wainscoting came from trees taken down on the site. The front doors were salvaged and fashioned from a fallen old-growth fir and crafted using a computer-driven router, which was an interesting contrast to the hand-carved poles. The Museum Society set up the display of Pender artifacts and farm implements near the main staircase.

Some of the materials used in the building of the Hall have historical significance. When the bridge between the islands was repaired, many large beams were saved from the firewood pile.

These were used as roof supports. The huge timbers holding up the main staircase were salvaged from buildings of the Coast Shale Company that operated a sandstone quarry and brick-making factory at Bricky Bay from 1912 to the mid-1920s. The thick tongue-in-groove flooring for the upstairs came from a shipyard on the North Shore of Vancouver.

The decade of the ‘90s was a wonderful time to be involved in community building. I remember when everyone was invited to show up to help strip the bark off the main Douglas fir logs, and I remember the day an army of people with wheelbarrows showed up to help transport the cement for the main floor. Another interesting time was the Sunday morning that photographs were being taken for the “Boys of the Hall” fundraising calendar, which featured 12 of the island’s best wearing little clothing and with saws or tool belts covering strategic body parts. The timing was important as many islanders were making their way along Bedwell Harbour Road to and from church services. And I remember April 20 when the first community gathering was held in the Hall to witness the unveiling of the Bear Mother Poles. The children’s choir and Pender Young Dancers performed and the women laid down their carving knives for the last time.

Our potluck feast included bannock and salmon. It was a proud day for all of us. The Hall was officially opened a couple of weeks later by Pender Island Recreation and Agricultural Hall Association president Alan White.

I must acknowledge two “Boys of the Hall,” Bill Bastendorf and Brent Marsden, without whom our carving project would not have succeeded. Bill let us loose in his shop for the tool-making sessions and did so many things behind the scenes to help us. Brent as Project Manager and Building Committee Chair rescued us from many predicaments and offered sage advice.

To close, the Bear Mother Project brought together one talented and generous First Nations’ man and three generations of women, from all walks of life and socio-economic groups. They took up a challenge and, almost two years later, proudly celebrated the raising of three stately welcome poles, but more importantly, they all came away having forged strong bonds of friendship. That’s what community is all about.” 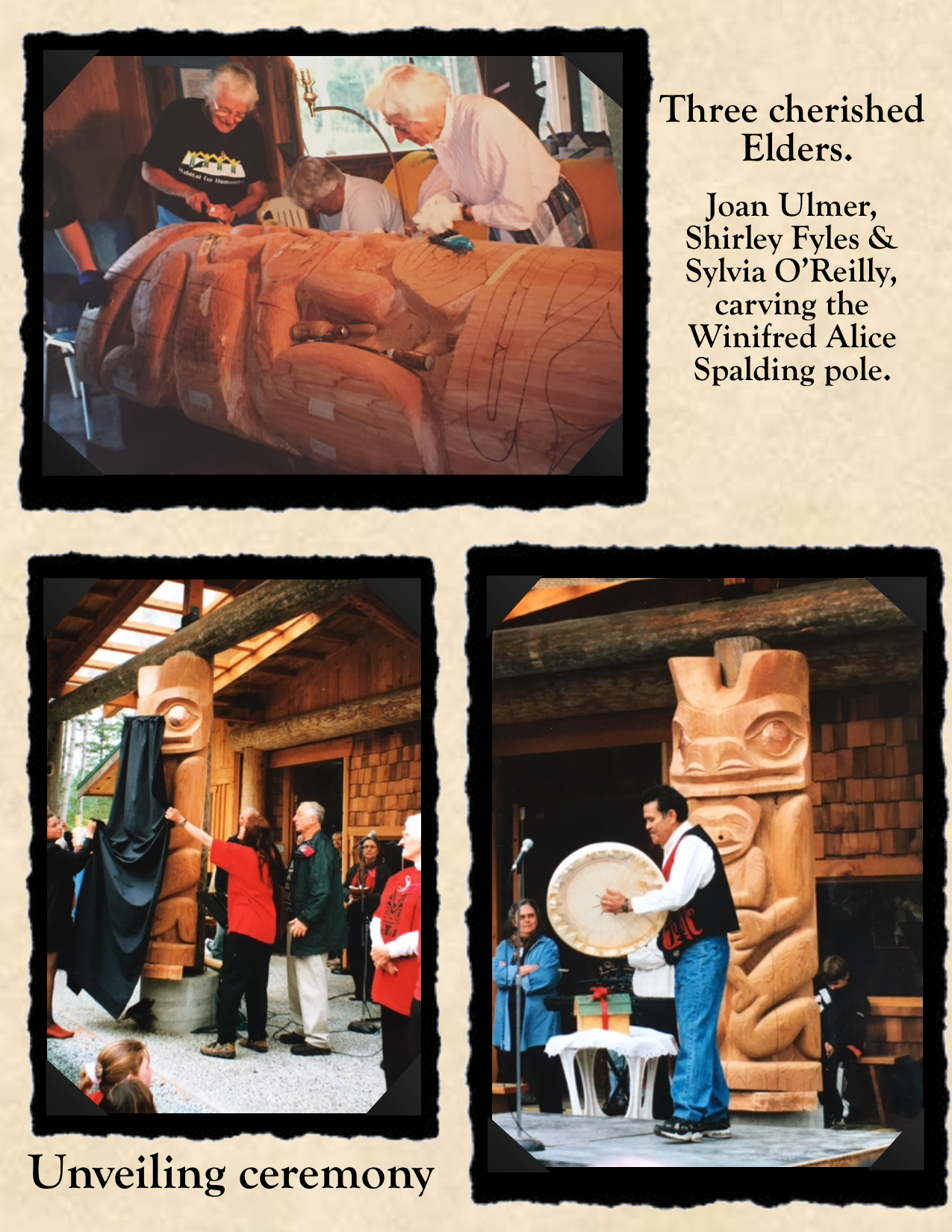